How Does Evolution Work?

I've been reading a cellular biology textbook for awhile now, and I find myself asking the same question on every page.  At the subcellular level, life consists of sequences of chemical reactions between all manner of molecular structures, in highly regulated step-by-step processes, interdependent with and coordinated with other processes on the same or higher levels.  How does a strictly regulated, interdependent, coordinated, complex sequence of events evolve?  Does it evolve from another strictly regulated, interdependent, coordinated, complex sequence of events?  How does that happen?  If it's a necessary sequence---as it must be to be there in the first place---you can't just change it so that it does something else with no regulation or coordination; that would be disastrous.  It all has to fit... it all has to work... every step, every time, or else it's discarded - right?

I'm asking the question in all honesty.  Seriously, if anyone has an answer, please comment below.  I want to get specific though.  I want to get into the nuts and bolts of how some existing sequence evolved, every step of the way: what it was previously, what it was at every change and why that would be conserved, and what it is today.  I'm not interested in a 'Creation vs. Evolution' debate, nor will I respond to trolls.  If you don't have an actual answer then please just go away.
Posted by Liberteur at 12:33 PM No comments: 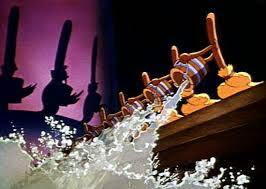 Life is unnatural.  Yes I believe that.  The natural state of something is the state in which it would remain if left alone, (think of how gases disseminate, or dust settles).   Life is unnatural because--rather than settle out, or disseminate--the things that work together to make something alive defy nature at every turn.

Let me give one brief example.  Biological organisms are chock full of molecular structures called 'enzymes' which could be characterized as the 'worker bees' of cellular function: they get things done.  Now, there are certain enzymes that do nothing but facilitate chemical reactions.  We're not talking about everyday, run-of-the-mill, natural chemical reactions.  No, these chemical reactions take place at rates sometimes thousands of times faster and significantly cooler than they would occur 'naturally' (that is, unaided).  Normally, increasing the rate would increase the temperature, but enzymes somehow manage to make these reactions occur at faster rates and cooler temps.

So you have these molecular structures, with no minds of their own, working together with other molecular structures, to bring about just the right chemical reaction, at just the right rate, and just the right temperature, to sustain life.  Now why would molecules do that?  What possible reason would a molecule have to work together with other molecules for anything?  It's positively unnatural!  Of course it's not just enzymes, there are thousands of molecular complexes throughout the biological realm that are actively working to circumvent nature.

Now if we were to witness unthinking entities doing unnatural things (like say, the brooms in the scene from Fantasia depicted above) we would immediately think "magic"... right?  No, actually "magic" would be the last thing a rational person would think.  We would suspect trickery or some sort of intelligent intervention to give the appearance of magic.  Why?  Because unthinking entities don't do things like that on their own.  It's just not natural.  So why do we give life a pass?  Why do we believe life is some sort of magical miracle and not the result of intelligent intervention?

What Microsoft's Racist Chatbot Teaches Us About Austrian Economics

I'm sure we've all heard by now about Microsoft's failed chatbot experiment (where the Internet corrupted an innocent AI in just one day).  But what does that have to do with Austrian Economics?  Just this: the programmers of "Tay" the chatbot could not have predicted what millions of Internet users were going to do, and this--the unpredictability of human actions--is the central tenet of Austrian Economics.
Posted by Liberteur at 11:04 AM No comments:

Liberteur
The word "gospel" literally means "good news". So what's the good news? The good news is that Jesus came to set us free from all of this crap. Everything that plagues humanity was nailed to the cross. He sets us free in two ways. First, he reveals the truth to us. He exposes the greed, lies and corruption of the "kingdoms of this world", i.e. the human establishments of wealth, power and religion. And second, he takes up residence in our hearts to heal us and set us free from the same kinds of things within us. This blog is my imperfect attempt to share some of my own imperfect thoughts with an imperfect world. It reflects my changing sentiments over time. My political leanings have changed from conservative Republican to Libertarian to apolitical as I gradually realized that humanity's problems are spiritual, and as such, have no political solutions.